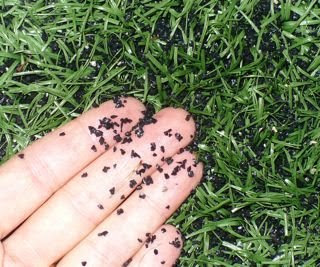 As part of the Coastal Marine Resource Center's Policy Program, the CMRC has published "Artifical Turf and Water Quality, The Effects of Crumb Rubber on Water Quality" now available for download on the CMRC website.

Synthetic turf recreational fields have emerged as an alternative to natural grass fields with the primary advantage being artificial turf fields are less averse to rain, snow, and heavy use. However, significant debate has arisen over the use of crumb rubber, made from ground up tires, as an infill product on synthetic turf.

The primary concern for opponents of crumb rubber is that over time the rubber leaches chemicals harmful to both human and environmental health. Furthermore, the crumb rubber pellets may create additional pollution in waterways if transported during precipitation events.

Currently, there is a growing body of evidence supporting both sides of the debate. This paper will present the arguments both for and against the use of crumb focusing on the implications for water quality.

The paper will advance certain precautions and guidelines that may be taken to safeguard against potential hazards Table 1, Recommendations for Containing and Managing Crumb Rubber.

These are recommendations to prevent the release of crumb rubber into the surrounding environment and minimize the flow of water from fields to water sources and water bodies.
Posted by The Coastal Marine Resource Center at 10:18 AM 37 comments:

Seining (Fishing) Under the Manhattan Bridge 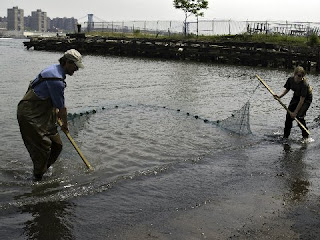 Fish under a bridge? Yes, it's possible to find fish, along with many
enthusiastic kids and adults discovering underwater estuary creatures
at the beach under the Manhattan Bridge in Brooklyn Bridge Park.

June 14, 2008 was a day of aquatic discovery for about 90 people who came out for the CMRC's and Brooklyn Bridge Park Conservancy's seining program.

Join the CMRC and Brooklyn Bridge Park Conservancy for another exciting seining event on October 11th, 11:30pm at the Brooklyn Bridge Park. Your eyes will be opened to diversity of the marine and aquatic life surrounding our great metropolitan area, just below the surface!

See what the local paper had to say:

http://www.brooklyneagle.com/categories/category.php?category_id=31&id=21325
Posted by The Coastal Marine Resource Center at 9:24 PM No comments:

Results from June 21st Beach Clean -Up: Thanks Volunteers!

Thank you to all CMRC volunteers and Americorp members who helped clean the Memorial Field beach at Jamaica Bay. We collected over 700 items, mostly beverage bottles (over 300) and plastic bags.

Everyone worked through the heat, found lots of horseshoe crabs, and enjoyed each other's company. Some of the highlights (or lowlights) of what volunteers found included lots of large sytrofoam pieces, a fridge, vinyl material, fishing gear, and a tire.

The next CMRC Beach Clean-up will be held at the Big Egg Marsh beach on August 23rd. Please contact the CMRC for more information at connect@thecmrc.org if you or your groups would like to participate!
Posted by The Coastal Marine Resource Center at 9:17 PM 1 comment:

Web Seminar on Business Stewards of the Estuary: A Success!! 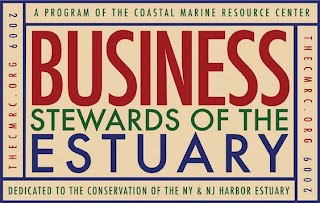 The CMRC held the Business Stewards of the Estuary Program Web Seminar June 26, 2008. Thank you to the many participants who provided valuable feedback on the next steps forward.

If you would like information about the webseminar or Business Stewards of the Estuary materials, please contact the CMRC at:
connect@thecmrc.org

Click here to view the recorded Web Seminar in its entirety.

The Business Stewards of the Estuary Program is a pilot project conducted by the CMRC to establish a program to recognize businesses that adopt sustainability practices in their operations. Restaurants are eligible for recognition in 2009 under this program. Please contact the CMRC if you would like more information.
Posted by The Coastal Marine Resource Center at 4:31 PM No comments:

As CMRC's supporters know, we are working hard to grow the CMRC's programs and provide the NY-NJ region with educational opportunities and policy recommendations to help protect and preserve the NY-NJ Harbor Estuary.

We have been so lucky to rely on our dedicated volunteer webmaster since the very beginning of the beginning! Jon Neilson has put in the most time, effort, and talent of any of our volunteers. Thank you, Jon!

To save Jon time, we'll be updating the CMRC website to make it more user friendly, and easier to update on a daily and monthly basis. Keep on the look out for our new programming info. You'll see information on our:

The CMRC's Business Stewards of the Estuary Program


Thanks for your support!

Cortney
Posted by The Coastal Marine Resource Center at 4:27 PM No comments:

A Round of Applause to all the Volunteers at the Big Egg Marsh Beach Clean-up! 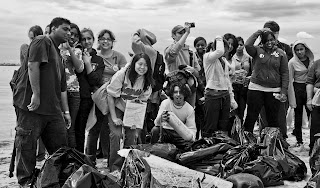 CMRC volunteers at the May 10, 2008 Big Egg Marsh beach clean-up deserve a great amount of recognition and praise for their hard work in Jamaica Bay.

Together the volunteers collected over 700 items of litter and marine debris from the beach. The majority of items found on the beach were plastic bags – 215 total. Volunteer also found over 180 glass and plastic beverage bottles.

Other litter and debris included fishing gear, picnic items, and diapers, as well as stranger items, such as a car bumper. The most peculiar finding was a overturned, mostly buried car. In the end, volunteers carried eighteen full bags of garbage to the Big Egg Marsh parking lot to be picked up by the park authorities.

While collecting garbage on the beach, the groups of volunteers documented their findings on the International Coastal Cleanup™ Data Card provided by The Ocean Conservancy (more information on this can be found at www.oceanconservancy.org). The data card divides garbage into six different categories: shoreline and recreational activities, ocean/waterway activities, smoking-related activities, dumping activities, medical/personal hygiene, and debris items of local concern.

Because of the previous night’s storm, volunteers were able to rescue about 8 stranded horseshoe crabs, which were returned to the water. Later during low tide, volunteers could spot horseshoe crabs spawning and gathering close to the shore.

Within the span of three hours, the large group of volunteers managed to clean up a sizable section of the Big Egg Marsh Beach. By the time the volunteers left for the day, the beach looked more pristine than when it was found. Cortney Worrall, director of the Coastal Marine Resource Center remarked that, before the arrival of the volunteers, Big Egg Marsh was, “a beautiful beach that needed a lot of help.” That is exactly what the volunteers did, helped.
Posted by The Coastal Marine Resource Center at 11:17 PM No comments:

The CMRC was lucky enough to honor the students of Academy I Middle School in Jersey City, NJ. The CMRC presented each of Mr. Osenenko's students with certificates of appreciation and a CFL light bulb (no kidding) for each student in honor of their work to protect the ocean and coastal areas surrounding New Jersey and New York.

Check out this link and the below CMRC article describing the students' great work.

We hear almost everyday about what to do to protect the environment. Without providing a list of the many things we can do to help, let's start with just one small commitment. This is the challenge the CMRC presented to the audience at the Academy I Middle School awards program last week:

Simply commit to purchasing one CFL lightbulb and replace one incandescent light bulb in your home this week. If every American did this today, we may have made a real impact this Earth Day.  Climate change is the greatest long term threat to the ocean and our coastal areas. Replacing a single incandescent bulb with a CFL will prevent a half-ton of Carbon Dioxide from being released into the atmosphere over the life of the bulb.

And while you're at it make sure to keep tuned in to the CMRC's website for upcoming information on environmentally-friendly practices for businesses and restaurants as we wrap up our two-year Business Stewardship Project.
Posted by The Coastal Marine Resource Center at 10:41 PM 1 comment:

Hats Off to Academy I Middle School in Jersey City, NJ!!! 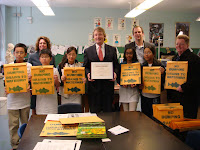 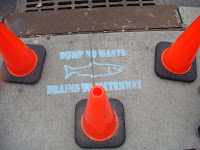 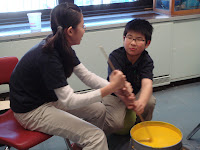 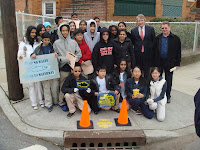 Academy 1 Middle School in Jersey City deserves a huge amount gratitude and recognition for their work to protect our oceans and educate everyone about storm water pollution! On Tuesday, March 18, the “Cimate Academy” team of Mr. Osenenko’s sixth grade students, David Chen, Tsering Bista, Mathew Aquino, Yoonji Oh and Crystal Jahoor, kicked off the campaign "Clean Cities Make Clean Oceans" by painting the storm drains near the school with a stencil that stated “Dump No Waste: Drains to Waterways.”
The students were supported by Mr. Daniel Becht, Executive Director of the Jersey City Municipal Utilities Authority and Mr. Joseph Beckmeyer, Chief Engineer. Packets of paint, brushes, and stencils prepared by the Climate Academy were delivered by The Municipal Utilities Authority so that all the schools could participate in the project on March 24 and March 25, 2008.
The team of five students from Academy I organized themselves into an organization they call The Climate Academy. Sixth graders David Chen, Tsering Bista, Mathew Aquino, Yoonji Oh and Crystal Jahoor first tackled them problem of educating the public about global warming.
They developed two public service announcements that are currently airing on Comcast Channel 1. This was achieved by the support and dedication of The Media Arts High Tech Magnet Program at Snyder High School. The Climate Academy Films were edited by students in the media program. The high school media students were inspired to also enter the contest.
The Climate Academy Team was recently awarded $3000.00 and will now compete for the grand prize. The success of The Climate Academy revolved around the cooperation of Dorie Dunham (Media Instructor), Thomas Horan (Media Arts Tech Program Director), and Grace Moriarty (Principal of Academy I) and Joseph Osenenko (Science Instructor).
Check out the link on Clean Ocean Action's webpage about this work! Thanks to the students and all collaborators for this great work to protect coastal resources!
http://www.cleanoceanaction.org/index.php?id=648

Posted by The Coastal Marine Resource Center at 9:55 AM 2 comments: